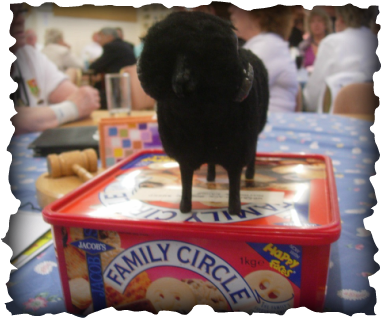 Friday morning, and the 2011 tour started with the Creigiau Travel coach wending its way up the M4 to Abingdon.
Confident of giving the English a hiding on the bowling  green, the Pentyrch bowlers warmed up with lunch in their Abingdon Hotel - plus a few beers for courage in the White Horse - before introducing themselves to their first  opponents at West Oxford Bowls Club.

The hosts lulled the visitors into a false sense of security with their very warm welcome, and they started well, grinding most of the visitors' rinks into submission. Only the rink of Don Wibley kept the Pentyrch score in credit.

The post match festivities continued in a similar vein as the hosts put on a superb buffet, but then Pentyrch got their own back. Led by Rocking Tommy Murray they wiped the floor with their singing, winning the Song Contest by more than a few bars.

As 'practice makes perfect', the choir continued to practise in the White Horse, well into the early hours.

On Saturday the coach dropped the tourists in central Oxford where they saw the sights and history of the City of Spires, before  being entertained in brilliant sunshine by their hosts Oxford City & County Bowls Club.
The superb facilities were matched by a superb display by the Oxford bowlers, and apart from the rink of Tim Morgan, the tourists were again left happy but beaten.

Sunday saw the tourists enjoy a walk along the banks of the River Thames before the short journey to Abingdon Bowling Club. The weather was a little damp and the tourists were now wilting after playing 3 games on consecutive days, plus a couple of very late nights. Surprisingly though, they gave a much improved performance with the rinks of Russell Howell & Margaret Farmer victorious, and two others failing only narrowly at the end.

Tommy and the Pentyrch choristers again entertained during the post match homemade scones feast, with some traditional Welsh song and the reinvention of a few more.

The journey home was made more bearable with a dvd of the 2009 tour to Ilfracombe, wine that was won in the various raffles and the cancellation of the bingo.

With the praise from the committee that he had "put his heart and soul into the tour" (which means he behaved like the perfect tourist), the 2011 Tourist of the Year award went to Bryn Owen.

A very enjoyable tour, with three excellent hosts clubs. Thank you to all concerned.